(GRAND RAPIDS, MINN)             Rusty Eichorn’s store in Grand Rapids has been the go-to place for cold weather gear for years.  But since December of last year, he now has customers from around the country who are counting on him to help them prepare for winter construction work.  Glen’s Army & Navy Store has seen a dramatic increase in customers buying everything from boots, socks, gloves, long underwear, handwarmers, and insulated bibs as they work on the Line 3 Replacement project.

“Our store is booming with traffic up by 50 percent because of Line 3 construction workers needing to gear up for work and winter,” said Rusty Eichorn, owner of Glen’s Army & Navy Store. “We knew Line 3 was good for a lot of different reasons, but it has been amazing to see the immediate impact when the final permits were issued, and work started.  Many of the workers were ready to work but may not have been fully prepared for winter.  They are nice people who are happy to be here and to have the chance to work.  It’s just fantastic to see the energy and excitement throughout the town.”

Construction work started in December of 2020 after more than five years of review by regulators and is now almost 1/3rd complete.  There are now more than 5,000 people working on the Line 3 project in 14 counties across Northern Minnesota that also includes approximately 400 Native Americans.  Crews continue to make significant progress despite the cold winter and efforts by project opponents to try to use legal action to stop work. Last week a federal appellate court judge denied a request by opponents to stop work by making unfounded claims related to the environmental review.  That follows a decision by the Minnesota Court of Appeals that rejected a petition from the Red Lake Band and the White Earth Band of Ojibwe to halt construction.

The Line 3 process started in 2014 during the Obama-Biden Administration under a consent decree that ordered the line be replaced.  Enbridge submitted their application to the Minnesota Public Utilities Commission (PUC) in 2015 to replace Line 3 as part of the company’s integrity and maintenance driven program.  The Line 3 project is the most reviewed pipeline project in Minnesota history and has been reviewed by state and federal agencies and regulators for almost six years.

“We watched patiently for years as the project went through the process, hoping it would finally get approved,” Eichorn said.  “The facts never changed, and this winter proves again how much we all need to have a fuel source we can depend on.  It’s great now to see things move forward and work getting done.  Everyone at Glen’s Army & Navy Store and for that matter across the entirely of the Line 3 route are proud to serve the pipeliners.” 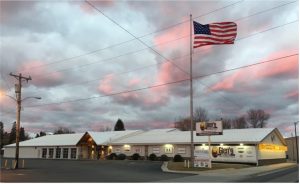 Glen’s Army & Navy Store was founded in 1946 by Glen Dix to create a store for people looking to use military surplus items for hunting, camping and work.  As the business grew and needed to expand, Dix built the current store across the street from the original location that allowed the business to expand to offer more products. The store continues to serve customers across the region but now also has customers around the country through its online store.  Eichorn has been part of the store since 1980 and became the sole proprietor in 2017.

“Our family has worked hard to make this “Your Outdoor Store” and love the fact we continue to have a great catalog of amazing sporting goods, clothing, gifts and souvenirs,” Eichorn said.  “We love being part of this community.  Last year was hard for so many, which makes Line 3 such welcomed good news.  In addition to meeting new people who are here to work, Line is bringing economic hope to so many that will create a long term, positive benefit for years to come.  To learn more about the store, please visit glensoutdoors.com.

Letters to the Editor Supporting Line 3:

We can’t afford to wait any longer for Line 3

“It’s long overdue for those making decisions in this state to pause and look at the facts. We cannot afford another appeal. Too much time and taxpayer dollars have been used to repeatedly determine that Line 3 is necessary.

If we do not approve Line 3 and get started soon, the people of Minnesota will deserve an explanation about why the most studied pipeline project in our state’s history – that literally checks every box – was stalled at a time when our economy needs it so much.”

Nearly six years to replace Line 3 is too long

“My family has farmed in Clearwater County for 85 years. As farmers, we take pride in our land and work hard to take care of the soil and water around us. We also take very seriously planning our farming operations, including rotating our crops and maintaining our equipment.

For 48 years, we’ve hosted six pipelines on our property and have always had a good relationship with the company. In 2014, we received a letter from Enbridge about the company’s intention to replace its Line 3 pipeline. Since that initial letter, we’ve worked with Enbridge on the easement for the replacement pipe and have considered our farming plans to accommodate construction.”

“In trying times like these, you would think local governments would try to work together to get things done. The fact of the matter is, they can’t — or they won’t. The gridlock in our state house is at an all-time high, and neither side seems willing to concede anything to the other. You would think they would care more about the people than these political chess matches; but for the most part, that’s not the case. Minnesota needs jobs more than ever — as well as the hope that things can get better. As we struggle with COVID19, the changes it has forced upon us have left too many of our businesses to drop like flies, with more people applying for unemployment every day.”

Stay Informed:
Be the first to know about Line 3 news as it happens by joining the Minnesotans for Line 3 email list.